have you heard? a new species from a distant planet has been discovered! these creatures are known as "tamagotchi" ! they are strange little guys born from eggs who can take on countless forms! ... okay i know this sounds like pokemon, but it's NOT!!!

tamagotchi are virtual pets that began appearing on earth in late 1996 in little shells like this, that allowed us earthlings to interface with them! we are tasked with taking care of them! by feeding them, playing with them, cleaning up after them, and in newer versions, helping them figure out what job they want, or finding a spouse for them!

that is the entire "game" of tamagotchi. you take care of them to the best of your ability, and depending on how well you did, they can grow up into a variety of different adult species. although, if you neglect them, they can run away to find a better owner, or even die (in older versions).

i have been a virtual pet fan for almost 10 years now, although i didn't actually get my first tamagotchi until 2014. games like nintendogs, and the littlest petshops virtual pets were more accessible to me, because at the time tamagotchi wasn't as popular. it was very much still around, but more types of virtual pets took the stage. 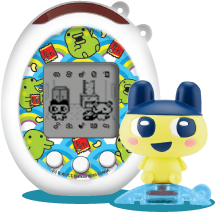 first, you need to decide which tamagotchi (game) you want. that will determine the kinds of tamagotchi you'll be able to get. here is a good guide of all the current tamagotchi "generations" there are! the wiki is an incredibly helpful resource when it comes to anything tamagotchi.

next, you gotta learn how to take care of them!

each tamagotchi has its own gimmick, so we'll just focus in the very basics (P1 and P2) tama care.

if your tamagotchi gets sick, you will need to feed it medicine to make it better. they can get sick randomly, or as a result of over feeding it sweets.

like everyone, tamagotchi poop. use this icon to clean it up! if you let your tamagotchi fill up its space with too much poop, it will get sick and die.
don't do that!

in order to become functional members of tama-society, they need proper discipline. sometimes, they will call for your attention when they don't really need anything. use this button in order to scold them for doing that! when the training meter is filled up, they will never make fake attention calls after that.
this feature only exists in pre-color generation tamagotchi.

when tamagotchi go to sleep, you need to turn off the lights in order for them to sleep soundly. you can turn the lights off 30 minutes before they normally would to gain a happiness heart, and put them to bed early.
this feature only exists in pre-color generation tamagotchi.

like i said above, i've been collecting tama for a little under a decade now. i think i have a pretty decent collection! especially now that tamas are coming back to stores i've been able to get them much easier. :) below is a picture of my collection! 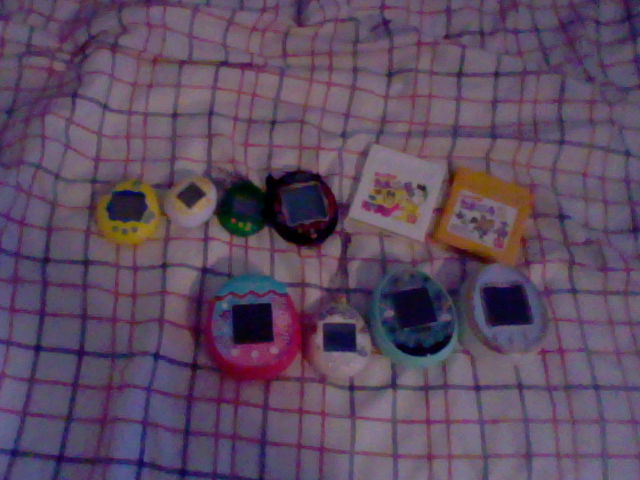 not in any particular order, the tama i have are:

my absolute favorite tamagotchi is the angelgotchi! it's considered a vintage-era tama released in 1997, in which you take care of dead tamagotchi who came back to earth to give thanks to their human caretakers for a good life, and stay with them a little longer.

fun fact, the angel tamagotchi was the first to include a "bad end" to the vintage games! the goal of the angelgotchi is to make sure it does enough good deeds so it doesn't become a devil. there is an actual bad end scenario where your tamagotchi becomes a deviltchi!

this is the ending screen in question, your angelgotchi having become a deviltchi! well, technically this is only the bad end screen in japan. the english versions is just wiggling text that says "bye bye!" while the good end is just a bunch of stars covering the screen in america, while in japan it just says "thanks!"

this is a PS1 tamagotchi game, and my favorite tama spin-off! tamagotchi has a bunch of video games, surprisingly. i actually have 2 of them (both game de hakken!! tamagotchi games for gameboy), but they're less of a "game" and more... tamagotchi but on the gameboy, so time only runs when you're playing them.

the thing though, specifically about game de hakken 2, is that it's actually the easiest and most accessible way to play umi no tamagotchi and mori no tamagotchi, since both are incredibly expensive if you look for the actual vpets. but this section isn't about them! this is about hoshi de hakken!! i just wanted to share that while i was on the subject of tamagotchi video games. hoshi de hakken is a game about dr. banzo and mikachu (who you control) crash landing on the tamagotchi planet, and taking the opportunity to explore the world and discover new species of tamagotchi! ... at least, that's what i can gather. ^^; the game is entirely in japanese, and my skills aren't up to snuff, so i can only really read the menus, none of the non-voice acted dialogue or anything else. out of every game i want a fantran of, this would be #1 since i love the premise!

i would go into a whole tutorial on how to actually play this game for non-japanese speakers, but there already is a really great one that i've been using! so, instead of making my own, i'll archive it here.

here's an actual archive of the above linked page just incase it ever goes offline. digital preservation, everybody!!

the one reason this is my favorite tamagotchi console game is that angel tamagotchi are actually in it! you can befriend almost every angelgotchi species, which hasn't been done since a 2014 tamagotchi smartphone app that has since been discontinued. these are technically the only color versions of angelgotchi characters!

i made these gifs of how they appear in the game from extracting the sprites.
if you want to use them please credit me. ^-^